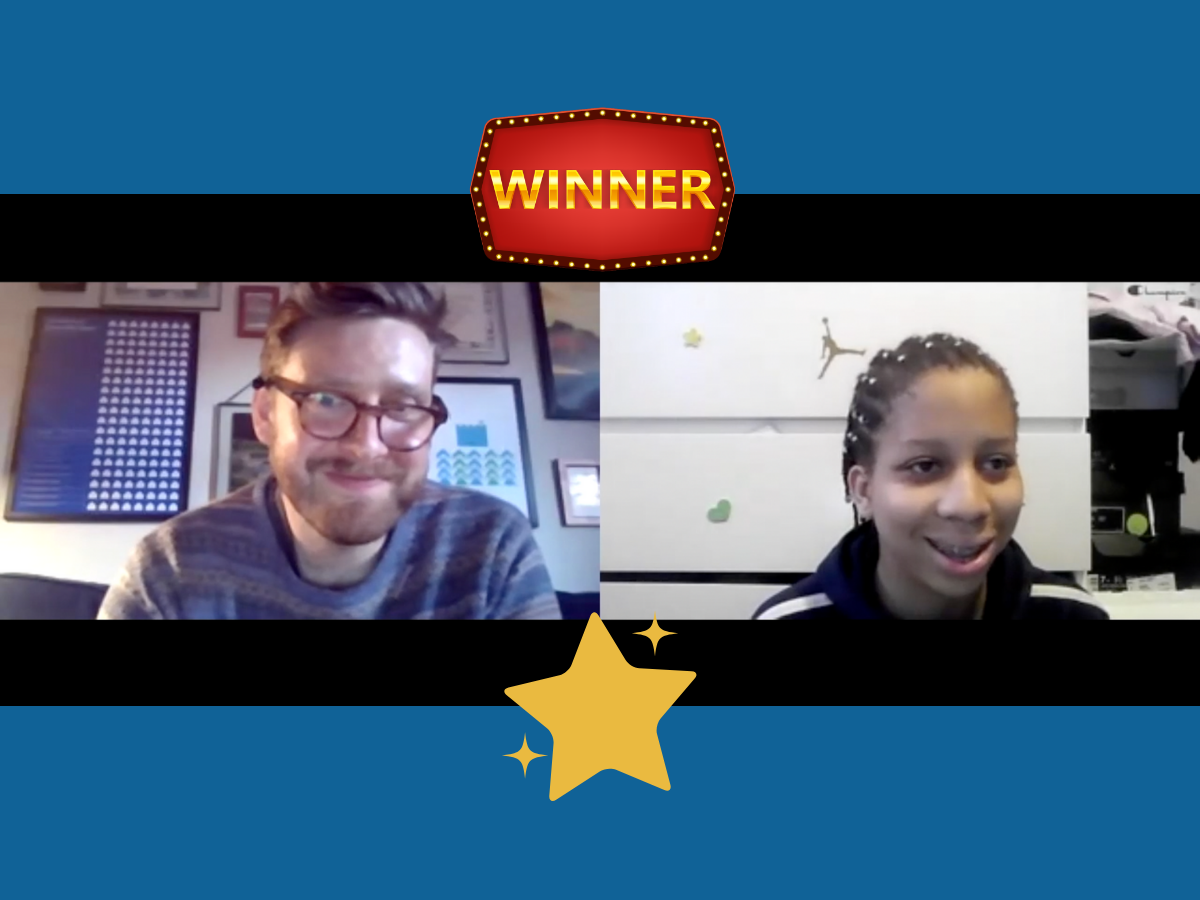 And the winner is….

Congratulations to Izuchi Okorie and Rupert Mountjoy for winning the UK Selection Round of the International Low Vision Song Contest!

We are thrilled to announce that 13-year-old Izuchi Okorie will be representing the UK in the first ever International Low-Vision Song Contest (ILVSC). Her spoken word poem ‘Angry Black Girl’, set to original music, is inspired by the murder of George Floyd and the Black Lives Matters movement. Izuchi will perform her piece in the final on May 21st with Rupert Mountjoy  – her visually impaired mentor and musical collaborator.

The standard of all of the performers was incredibly high and we were overwhelmed by the amazing talents displayed by our visually impaired musicians during the UK Selection Round, which was hosted by LOOK.

Many of the performers are members of the LOOK Music Forum and Youth Forum, and it was during one of these online get-togethers that Izuchi met mentor Rupert. Rupert is a multi-talented musician and with Best’s disease – a macular degenerative condition resulting in sight loss. He spotted Izuchi’s talent immediately and encouraged her to enter the competition.

Izuchi started writing poetry at the age of 9. She lives in London and has an eye condition called ‘Nystagmus’ in which the eyes make repetitive, uncontrolled movements that can affect vision, balance, coordination and depth perception. She also has albinism – a condition caused by a lack of pigment in the iris. Her poem “Angry Black Girl” tackles difficult and timely themes head on. Izuchi says:

“My poem is inspired by the microaggressions that black and ethnic minority groups face on a daily basis. The writing process wasn’t hard because the topic is close to my heart. It was easy for me to write it, and after I got the first paragraph done, my pen just flowed…’

“We are so proud of Izuchi being selected as the UK’s representative in the first ever International Low Vision Song Contest, and happy our mentor programme played a part in supporting Izuchi to share her talent in this exciting new competition. At just 13, her incredible piece is so reflective of the times we are living through – and the double discrimination that can be faced by young people who are both blind and black. It is so important we start talking about race and disability, and ways to help young people find their voice. This year has been such an isolating time for everyone, and we are very grateful to our 85 LOOK mentors spread throughout the UK who gift their time to be a friend and guide to young people on their journey with visual impairment. The collaboration between Izuchi and Rupert shows the transformative power of peer relationships.”

Izuchi has a call to action to other young visually impaired artists, who might feel held back from expressing themselves. She says:  ‘Don’t limit yourself. Use anything as inspiration. As artists, we have to create so if one way isn’t open, there’ll always be another – we just have to find it. Don’t be afraid.’

How you can support Izuchi and Rupert

Izuchi and Rupert will perform ‘Angry Black Girl’ in the final of the International Low Vision Song Contest on Friday the 21st of May at 6pm (British Summer Time).

Please head to this website where you can watch the live event. A link to the online voting will be displayed during the show. Please vote for Izuchi and Rupert!!

To listen to Izuchi and Rupert performing ‘Angry Black Girl’ click below.

One by one shots every word from my mouth,

The hum of an angel,

But we answered the same question in class.

Then they asked me if everything’s alright at home,

Apparently my mums out wildin’ and my dad I’ve never known,

And I look after my siblings like I’m all grown.

So now it’s time to bring out the strap

Place my finger on the trigger and cock it back

See a stable household, I ain’t got it like that

According to them that goes for everyone who’s black.

Cos when I speak I’m too loud

When I smile I’m too proud

Oh and just in case you didn’t know

We’re all criminals for sure

This has ended up as a war

I’m a lying so hear me roar

And you wanna put me cuffs?

And if I refuse? That defines I’ve definitely got a weapon.

Put your hands where I can see them

It’s my turn to shoot for real

And for this I have many reasons

Cos I hate how you guys treat us

It’s about time I keep it real

Bandanna on, no face no case

My body slowly filling with rage

Because our picky hair was never it

Neither was our curves or our fat lips

We were told to use relaxer until our hair was straight

Then things got easier and we began to wear a lace

Now let’s talk about our braids

How many more black people do you wanna eat before your stomach can digest?

But you can’t love our fruits but hate our roots

And that’s on being the best.

An interview with Izuchi and Rupert

We caught up with Izuchi and Rupert after their dazzling performance in the International Low Vision Song Contest UK Selection Round to find out what inspired their work, how they felt about winning and what they plan to do next! Click below to watch the interview.