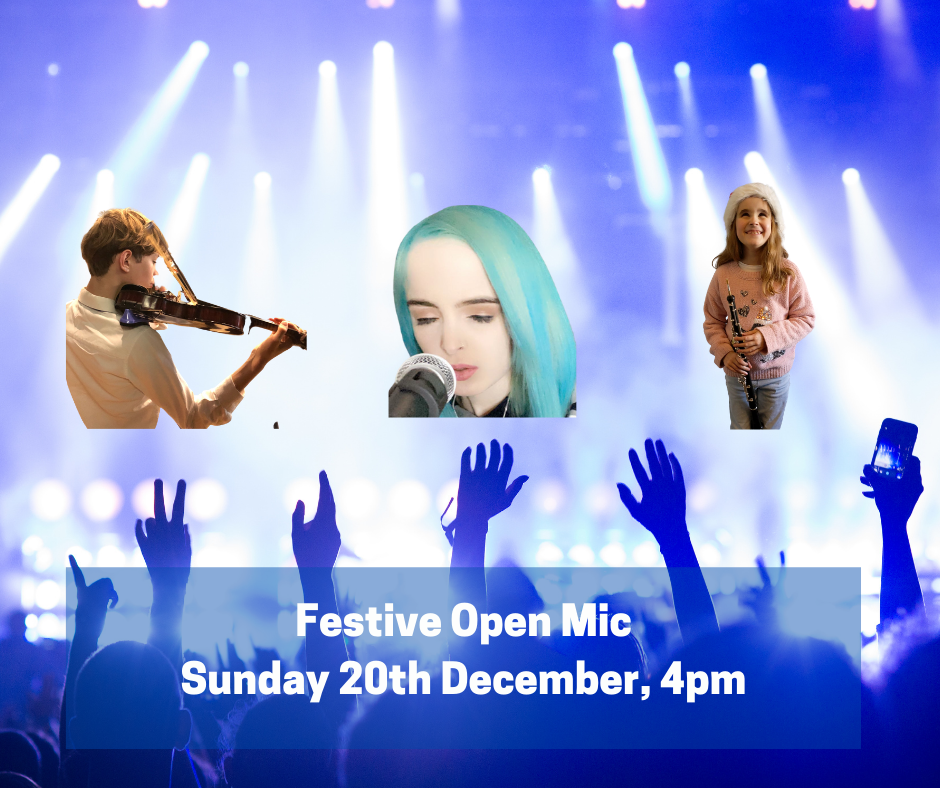 Celebrate the festive season with LOOK at our online Open Mic.

Following the runaway success of our summer Open Mic event, we’re getting into the Christmas spirit the only way we know how – throwing another brilliant party!

Join us on Sunday the 20th December for a right old Christmas knees up. Your household can join in the fun for just £5 a ticket; not only will you have an amazing time, you’ll also feel like the superstar that you are, for supporting our charity and helping us continue to provide our invaluable services to visually impaired young people and their families.

“I am a visually impaired vocalist that really appreciates all the work this charity does for people like me everywhere! I’ll be performing an original song that I’ve recently written and I’ve been singing and performing for around 13 years and I love it because it’s always been my anchor and escape.”

Theo will play his violin which he has been playing since he was three. He plans to play one Christmas number and one classical piece.

“I would like to perform in this event to support Look UK as they are a wonderful charity. I would also like to make people feel happy, because of the strange times we are living in at the moment. I will be singing Last Christmas by Wham. I have been singing from an early age and I will be practicing this song every day in the run up to the performance. I have been doing a lot of singing during the pandemic to make myself feel happier and to help fill some of the time at home particularly when Colleges were closed during the first lockdown. I enjoy singing, because it makes me feel happy and when I am singing, my friends and family praise me for it which makes me feel like I am making others feel happy too.”

All three boys will be playing piano and have learnt new pieces for this event. Ben can play jingle bells, Jonah can play silent night and Sam can play Shakey Stevens Merry Christmas Everyone! Each piece is about a minute long). They have been super-busy practicing regularly.

Ellie started playing the recorder at the age of 6, then the piano just before she turned 8. She has only been playing the Oboe since February and is loving it. Ellie is now 10 years-old. Keira played the piano for a short time during lockdown, and has been learning the violin for three weeks! She’s been waiting over a year to start violin lessons.

Alleah has been taking part in our online music forums and will be playing the piano for the Open Mic event.

Neyo has been enjoying LOOK music forums and both brothers performed at the last open mic singing and playing the piano.

Ethan and Jasper have a band called the Thunderbolts. They have recently released an album called transformations. Ethan writes all the music and plays keyboards and trumpet. Jasper plays the drums. They have been playing together since 2014 and use their music to raise money for the Norrie disease Foundation. Ethan has Norrie Disease. They’ll be performing a track from their new album for the Open Mic.