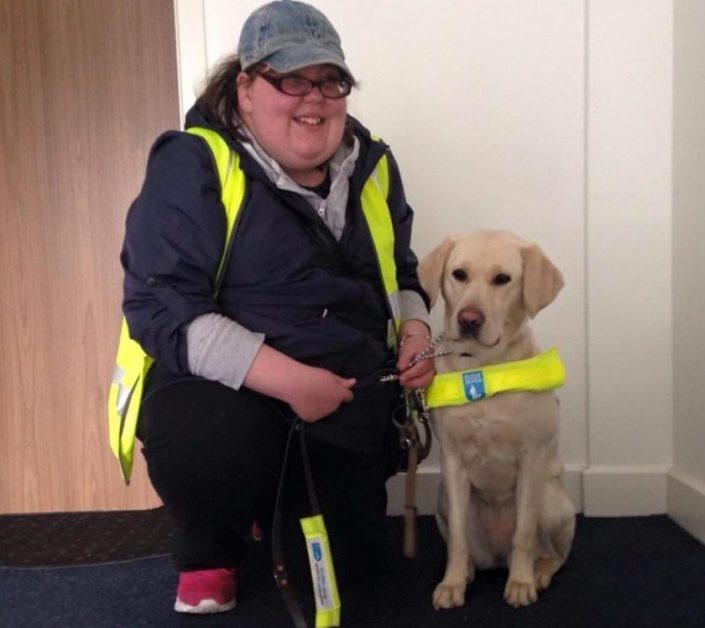 This month is Retinitis Pigmentosa Awareness Month. Look mentor Michelle shares what it was like coming to terms with her RP diagnosis and talks about the importance of staying positive and asking for help.

This month is Retinitis Pigmentosa Awareness Month. Look mentor Michelle shares what it was like coming to terms with her RP diagnosis and talks about the importance of staying positive and asking for help.

What is Retinitis Pigmentosa?

Retinitis Pigmentosa (RP) is a genetic condition that affects cells in the back of the retina called photoreceptors. It usually starts in childhood and over time causes loss of sight, leading to night blindness and the loss of peripheral vision.

Learning I had RP

Michelle’s parents first realised that there was a problem with her vision when she was a toddler, around 2 or 3 years old. Years of tests followed with no definitive diagnosis, and it wasn’t until Michelle’s brother started presenting similar symptoms shortly after his birth, that they were both diagnosed with RP. Michelle told us:

“I was around 8 years old and at the time; I didn’t really understand it.”

Michelle had what she calls ‘decent vision’ then; she wore glasses, but still played out with friends, and would ride her bike without much difficulty.

All this suddenly changed when she was preparing to take her GCSEs.

‘It was a nightmare’

“My sight started to deteriorate when I was around 15, 16 – when I was taking my GCSEs, which was a nightmare.” Michelle says. “All my papers had been ordered in a certain format, and then I lost a big chunk of vision so all of that had to be re-arranged.” Michelle was left with night blindness and was only able to see people’s shadows but not make out much detail and her ability to read large print was significantly reduced.

It meant that Michelle had to quickly adapt to having a reader and scribe to help her sit her exams.

‘The change was daunting’

Michelle found the change daunting at first. It wasn’t until Michelle went to college that she started using a screen reader.  “I was being a bit stubborn and trying to make myself think that I’d got more vision.” Michelle was also reluctant to start using the cane when she was 16.

“I’d lived in the same area all my life. I thought people were going to see me and say, ‘Oh she’s going blind’ and I didn’t want that.”

It took Michelle a while to come to terms with her loss of vision but going to the Royal National College for the blind was a key turning point.

“I wouldn’t be where I am now if it hadn’t been for RNC.” Michelle says. Michelle learned to live independently and thrived in her studies, passing her GCSE English exam resit first time, after struggling to do so in her mainstream college.

When Michelle left RNC she moved back home to live with her family. However, she soon realised to maintain the independence she had gained at RNC she would have to move into her own place.

“I felt what I had learned at RNC was going to waste. Living at home it was easier for my mum to do everything for me, to cook the meals, do the washing, so I decided to move out. I didn’t move far, just around the corner, but it’s been great.”

‘A whole new lease of life’

Living in her own home helped boost Michelle’s confidence and independence. She also got a guide dog, which has given her what she describes as ‘A whole new lease of life’

“Because I have night blindness, if it was ever sunny and I moved into an area that was dark I would freeze. But since having the guide dog I no longer stop and start on a walk; I can just keep going and get to places a lot quicker now.”

‘Take all the advice you can get’

Michelle advises other visually impaired young people going through an RP diagnosis to stay positive and ‘fight through it.’ Help is available, and Michelle recommends that people ‘Take all the advice you can get’

Michelle is one of our mentors, who offer advice and support based on lived-experience of visual impairment. If you are VI, 11-29 and want to talk, find out more about our free mentoring scheme, here.