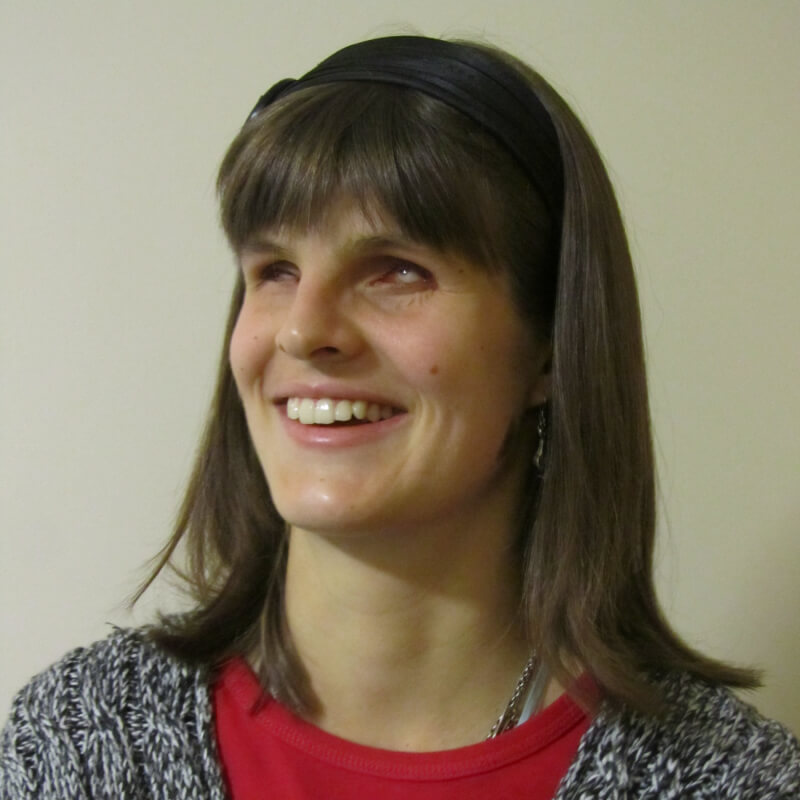 “Within days, I went from being the 'blind freak' to someone that people liked, someone they voted to be their Head Girl in my final year.”

I grew up as a farmer’s daughter in the Yorkshire Dales with too many siblings and plenty of animals. I had my own guinea pig and was pushed into the fresh air a lot, so I took full advantage of rollerskates, scooters, and anything my siblings did. I attended my little village primary school (there were only 16 pupils!) before being told that I had to sit the old-fashioned 11+ exams to determine which school I would go to.

I ended up at an all-girls grammar school which I hated after the first two years. I remember asking on my first day if they had any other disabled pupils; the response was ‘of course not, we’re a grammar school.

The teachers didn’t know how to support me and made comments behind my back to the effect that I should be in a special school. This attitude transmitted to the other pupils. When my QTVI came into tell the friends I had that I needed to be independent and do things by myself, I lost my friends and had a lonely three years left to do my GCSEs. I became mentally ill and exhausted, and fought with my family to let me go to New College Worcester.  My mum went to boarding school and hated it; she wasn’t going to put me through the same thing even though I was begging to go. My break times were so lonely and I would text the friends I’d met online, who all went to New College. I did well with my exams, despite every one of them going wrong in some way. By that time, I was on a part-time school programme as I wasn’t coping full time. I was finally allowed to go to my blind Hogwarts for Sixth Form.

Within days, I went from being the ‘blind freak’ to someone that people liked, someone they voted to be their Head Girl in my final year. I loved being at the college, the only drawback being that the academic standard wasn’t as high as my previous school and so the discipline to study had to come from me rather than the teachers. I did well in my A Levels: Psychology, English Literature and German. I really struggled when it came time to leave because of my fear around a mainstream environment. My secondary school experience had been so awful that I couldn’t see how I could succeed outside of NCW. My mental illness recurred and the staff were great at supporting me.

I loved taking part in the German exchange trips with the big blind school in Marburg. In fact, I loved it so much that on my last trip, I asked to speak to the headmaster and asked if I could live there! He said that I could live in one of the school-owned flats and assist with the teaching of English in the school. He also gave me a mentor, three-course lunches in the school canteen, and 450 euros a month to pay for things like flights. I didn’t tell my parents about this, which made for an awkward annual review meeting! They were great and came to move me into the flat in the September.

The school in Marburg had about 300 pupils, who lived in flats in the town. Younger pupils lived with staff in a family setup, and they were expected to help with house chores to increase their independence. They could then move onto living independently when they reached their late teens. Like the pupils, I was responsible for getting myself to school and walking the mile from my flat each day with a steep hill to tackle up to the school. It was one of the toughest and most rewarding year of my life. I loved teaching and because German culture is far more easygoing, the staff pretty much said ‘here are some classes for you to teach. Enjoy.’ I became more resilient and creative than I thought possible because I’d booted myself out of my comfort zone. I practically had to be dragged away at the end of the year.

By then, I was ready for university. In the sixth form, I had applied to go to the University of Gloucestershire because I had enjoyed their open day. The disability team seemed great, they even handed me a braille prospectus! In September 2011, I moved to Cheltenham to begin my degree in Creative Writing and Psychology. The disability staff had changed during my year abroad and despite my requests for the lecturers to be given plenty of notice of my arrival, I arrived to find that none of them knew I would be coming. It turned out later that I hadn’t put my signature to a piece of paper which allowed for my disability to be disclosed. Psychology was a struggle as a result of this, as it is largely a visual degree and the university didn’t know how to support me. I had to drop the Psychology element at the end of my first year, meaning that I had to stay an extra year to get my degree. I lived in halls as a fresher and was bullied by my flatmates. As my parents knew I was on the list for a guide dog, they bought a house in Cheltenham to get around renting complications, and three of my friends joined me in renting from them. I still live in the house, which changed from a student house to a home for Ed and I in 2015. I also graduated with my 1st class Creative Writing degree in 2015. Despite my enjoyment of the course and my fab lecturers, it was a relief to leave because I was constantly fighting accessibility issues, including the university’s attempt to prevent my guide dog from coming onto campus when he came along in my third year.

I went onto do a Steps into Work internship – a supported placement to help disabled people into paid work. For a year, I voluntarily assisted an IT Project Manager at EDF Energy. I learnt a lot, including that it was something I wouldn’t want to do for the rest of my life! My experience there helped me to get work at my local council in 2016.

I missed academic study and enrolled on the Masters programme. I had only been at the council a few months when I started the course, so I was studying and working part-time. The council job turned out to be tokenistic, so I had very little to do. I used the time to do my Masters work at the desk. I don’t know how I would have coped otherwise and was starting to struggle once I entered my second term. I was glad when my contract came to an end and I could focus on my studies.

Halfway through my Masters, my beautiful first guide dog became ill and had to be withdrawn. He was taken into Guide Dogs’ care on my first day of the new academic year. I had to dust off my cane and get to lectures. It was an awful time and I was glad of the work to distract me. I was matched with my new dog in the final months of the course, so that I had to take a month out to train and wrote essays in the Guide Dogs’ van in between training walks. It must have worked because I graduated with an MA Distinction.

I went into further study because I enjoyed teaching so much. I love working with people and would love to do something on the lines of being a lecturer.  I’m really looking forward to being a Look mentor. I work hard and play hard, with hobbies such as reading, socialising, crafts, and public speaking with Toastmasters International. My life isn’t complete without animals and with a dog and two guinea pigs, I’m banned from having any more pets!