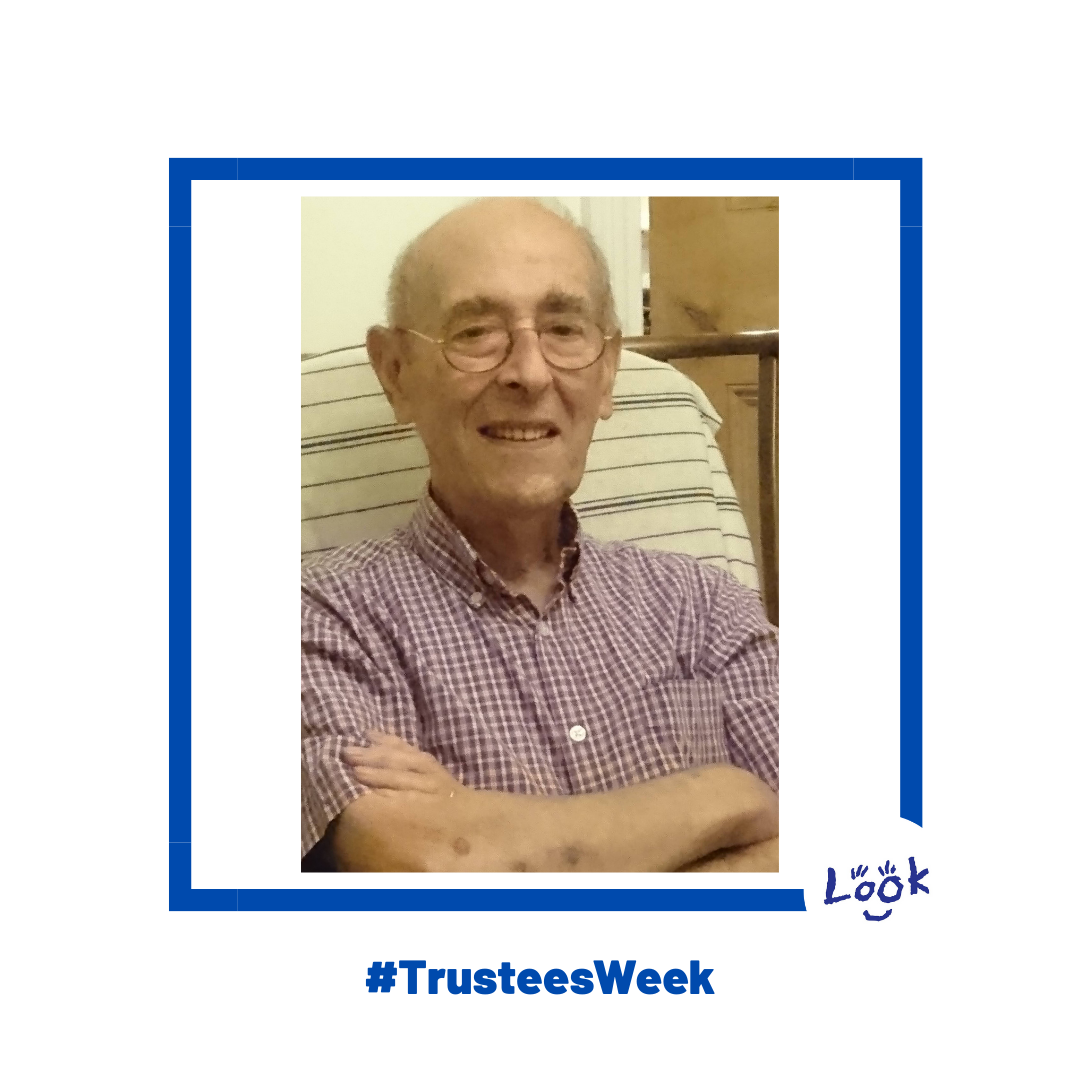 “I am Michael Wolffe and I am an Optometrist. I have been involved with LOOK since 2002 when I was approached by the then chair of LOOK, Professor Alistair Fielder, to give advice about LOOK’s finances as they had just lost their treasurer. I was at that time representing the College of Optometrists as the treasurer of Vision 2020UK, an umbrella organization that originally brought together over 40 organizations that were involved in working for the visually impaired.

Before I knew what had happened, my arm having been twisted into an almost unrecognisable shape, I was nominated as a trustee of LOOK and became its treasurer. No sooner had this happened when all but one of the staff of LOOK decided to leave without further ado. LOOK at that time was based in Birmingham and had it not been for Jennifer Bowen, turning up from Cardiff to help out, together with a local volunteer from Birmingham, Jane Bateman, LOOK would not have survived. In 2011 I became the chair of LOOK, a role I still hold.

What originally attracted me to LOOK was its small size, its commitment to the families who have been let down by the inability of professionals such as myself to effectively communicate, and by the unbounded enthusiasm of its founder, Jennifer Bowen.

I spent an early part of my career, working at the General Hospital in Newcastle upon Tyne. Whilst there, I established one of the first low vision clinics in the North East.

I left Newcastle to take up an academic post at Aston University in Birmingham where, among many other activities, I taught students about how to manage the issues surrounding visual impairment and how to relate to the visually impaired and their families.

For many years I was a trustee and vice chair of the Partially Sighted Society, The PSS is a charity that pioneered new innovative multidisciplinary approaches to the assessment and rehabilitation of the visually impaired.

I was a governor of Exhall Grange School, a day and residential school for children with visual impairments.  I was involved in a major research programme at the school looking at employment potential for such youngsters

I was elected as a Council member of the College of Optometrists and served for 25 years, eventually becoming its President and subsequently its treasurer. I acted as a senior examiner for the College and held similar positions for other examining bodies. I was a Visitor for the General Optical Council with the responsibility of checking and approving the standards of education provided by University departments of Optometry.

I was born in the east end of London in West Ham, a stone’s throw from Stratford East. In my youth Stratford was not the home of the Olympic Stadium but the home of Joan Littlewood and Theatre Workshop. My dad, who was a rebellious local councillor, was the driving force that persuaded the Council to allow Joan Littlewood to use the Council-owned Theatre Royal at a peppercorn rent. He subsequently became a trustee of the world famous Theatre Workshop that put on such shows as ‘Oh What a lovely War’ and many others.  Like my dad, I became a lifelong rebel and troublemaker following an early life as a juvenile delinquent!

I have four children, but alone among them, I support West Ham United. I sing cockney songs with genuine feeling and flair.

Last week was very intensive for me. I am a member of one of the major NHS Research Ethical Committees that is responsible for approving applications for clinical research in the UK. The committee is composed of both experts and lay members. I sit on the committee as an expert in Optometry. We met last Wednesday by Zoom to consider 4 routinely received applications. However, the day before, an urgent Covid 19 study application was received which I was asked to undertake the lead review. For each application a lead reviewer is appointed with the responsibility of analyzing in detail all the documents that are submitted, many of which are very substantial. The Covid study related to a trial of a new testing procedure that will be used on children that is less intrusive that the full procedure which involves the use of a probe that has to be placed at the back of the throat and also at the top of the nostrils, the results of which take a minimum of 24 hours to complete. The new teat involves the use of a cotton bud probe which is inserted onto the lower nostrils with results provided within 20-30 minutes. The lead reviewer opens the debate among the members of the committee and then leads the interview with the applicants once they are admitted to the meeting. Following that stage, after the applicants have left the meeting the case is further discussed and normally a decision is conveyed within 10 working days. However with Covid applications, the committee’s decision is conveyed as a matter of urgency.

On the previous day I was involved with another committee expert in reviewing 9 applications to substantially amend research studies that had previously been approved. All the applications were ultimately recommended for approval.

On Friday I attended a trustee meeting of another charity I chair, the Institute of Optometry in London. Because of the pandemic, the Institute had to close and was unable to see any patients during lockdown. The process of re-opening has been both complicated and stressful for the staff involved because of the need to provide a secure environment for both patients and staff alike.

Finally, I was instructed by solicitors in a case of possible clinical negligence.

At this time of the year I would normally be involved in preparing for our annual Music Hall which involves many of the local residents and traditionally takes place the weekend before Xmas. I usually perform the role of Master of Ceremonies and direct the Victorian melodrama that we put on. The pandemic has put that to bed for this year so I have more time to catch up on my gardening which I enjoy and gives me an escape from the trials we are all experiencing. I am a political animal and I am praying for a Trump free – as well as a Covid free – world. Unlike those that don’t like immigrants, I hold the opposite view since the majority of my family was born outside of the UK and live abroad. All lives do matter which is another reason why what LOOK is doing and achieving is so important.”