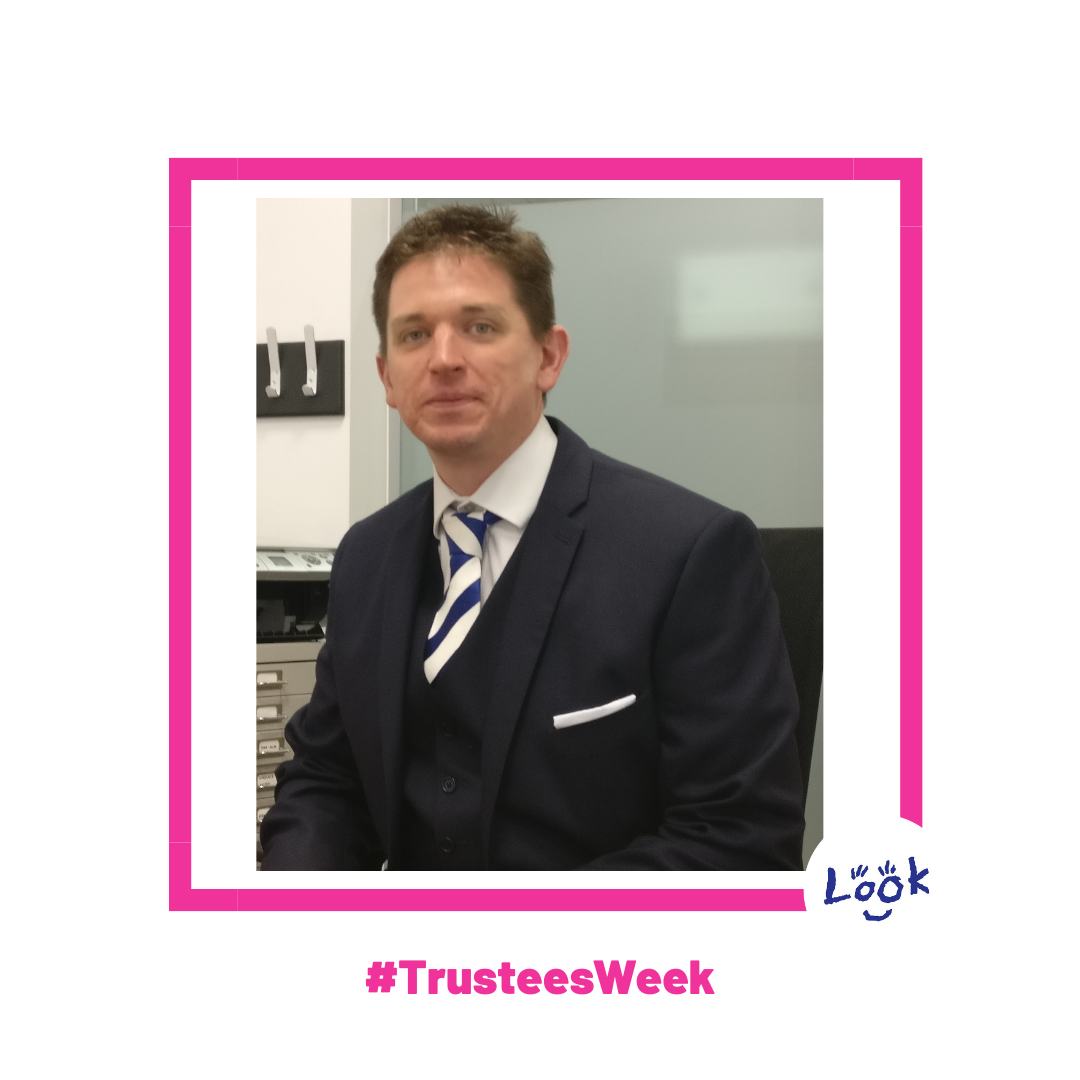 “I have been a trustee of LOOK for around 4 years now, but my association with LOOK’s CEO and with visual impairment started much earlier.

In the early autumn of 1992 , age 14, I was sat in a class with a teacher talking about how she lost the sight in one eye.  She described covering one eye and then the other and noticing a small blurred patch in the centre of one of her fields of vision.  Naturally being in a class full of bored teenagers, we all started covering our eyes, and I noticed that I too had a small blurred patch of vision, which I of course immediately ignored.

After mentioning it in passing to my parents, I was booked in for an eye test, which resulted in a a GP appointment, which in turn resulted in an emergency hospital appointment all in the same day.  That day seemed to go on forever, and as a normal teenage boy, I was totally oblivious to pretty much everything, including the seriousness that everyone seemed to be giving my little blurred patch of vision.

This was the early days of MRI scans and I was sent off for multiple scans, with hours of waiting for the results, when all I wanted to do was go home and watch TV… My poor mother!  What I hadn’t realised of course was that everyone was concerned I had a tumour on my optic nerve. My mother had gone off to phone home and break the news to my family that I may have cancer and would need surgery, but still – I was just disappointed that she didn’t come back with any cake, as she had said she was going to get a cup of tea….

Roll on 6 months, I didn’t have cancer; in fact all anyone knew was that my eye condition was genetic, they didn’t have a name for it, and they didn’t know how much sight I would lose, but sight I was indeed going to lose.  Again, and perhaps in shock or denial, it didn’t seem to really bother me, as right at that point, I was still riding my bike and could do all the things I wanted. It was only when I started to not be able to read the white board that it became clear that things would have to change.  After a lot of discussion it was agreed that I would go to New College Worcester, specialist provision for VI students. This was simply the best move ever for me, as  it gave me a realistic check about my sight, ensured I had the right sort of support on hand, but also made sure that as things changed I was being supported to adapt.  And it was here that I met Charlotte.

Skip forward another few years, and somehow (definitely not through hard work) I ended up at University on a course I didn’t really want to do, and in a town I knew nothing about.  From the outset it was pretty clear I hadn’t really thought any of this through, and I wasn’t very good at representing myself in terms of what I needed or how to engage with support.

However while my academic life was unravelling, my social life was doing quite well, as I had discovered the Student Union Equal Opportunities office and had started to work with them, eventually being elected as one of the oilers.  This ignited in me a passion for supporting people to achieve – it was just a shame I didn’t quite manage to do that for myself!

The writing was on the wall however, and University quickly became assigned to the history books when I finally left at the end of my first year… not that I told the University or my parents. Rolling on a few more years I put my newly found passion to support people to achieve, into practice and successfully applied to become a Disability Adviser at the University I previously left/wandered away from in 1999.  Over the next few years I returned to study part time alongside work, and achieved a degree and masters, and since 2015 I have held a senior role within the University of Leeds.

It is hear that I come back to LOOK.  Charlotte and I had been friends at school and had kept in irregular touch over the years, but getting a call from her out of the blue to tell me she was now CEO of LOOK was both a pleasure and a surprise.  What was clear from the outset was how passionate Charlotte is about LOOK and also what she wants the charity to achieve.  This straight away tied up with by passions for supporting young people to achieve their full potential.  I wanted to be involved!

Becoming a Trustee for LOOK was an obvious choice for me.  Charlotte is so passionate, as are her team, about supporting young people and their families, and that very much gelled with me and what I hope to achieve in my day job.  As a senior manager, I have responsibility for a number of functions within the University, one of which is our Disability Services team.  I see first-hand the difficulties experienced by many of our disabled students, as well as seeing how things could be so much better through better transitional planning, greater levels of discussion with young people before they make a move within education, and how we can support young people to be confident in understanding the systems and processes around them.  I believe strongly that LOOK is seeking to impose all these areas, offering support to the young people and also providing good quality reassurance and advice to parents and carers.

For me, being a Trustee is like going full circle – I see my situation within may of the users of LOOK, the issues with sight loss, difficulties in education, and the challenges that are ahead, but what I also hope that I offer LOOK is an opportunity to show that it can all work out – yes, it is a bumpy path, but nothing is totally out of reach, and never more so now that I know young people have access to a fantastic organisation such as LOOK, with Charlotte at the helm and her amazing team.”